Now it was time to start with the electrics. My setup will exist of 2 parts:
The battery and the high-current / charging stuff in the back (Chargers, inverter, main fuses and so on).
Under the bench in the back there will be a seperate fusebox for all the regular uses (Fan, lights, refrigerator and so on). With this, I was able to keep the high-current wires as short as possible.
For initial testing and build, I bought a small 105Ah lead-acid battery. I’ll replace this soon with a DIY build of 280Ah LiFePO4 (Lithium) batteries.
My setup is already suitable for Lithium (Except for the charger at the moment), so no major changes are required once the batteries are finished and installed.

Charging will be done in 3 ways

The inverter is a Xenteq 1500W inverter, pure sinewave. Nowadays, pure sine isn’t that much more expensive than a modified sine wave, and I prefer to have a good clean power, so didn’t go for a modified sine wave (Which sometimes can cause problems). Also, with the 1500W I have plenty of power to run some equipment with a higher current draw.
(But for now I’ll limit this, since the 105Ah lead-acid doesn’t like these huge discharge rates).

For the main cables I used 50mm2 (1AWG) to be able to run the inverter without too much cable loss and heat. All cables are connected using cable lugs, covered with heat shrink.

I also added a switch to be able to disconnect everything from the battery at once in case of emergency, or eg when the van isn’t used for longer periods (To prevent flattening the battery eventually)

For the lights, I’ve installed a seperate 12V circuit, powered by a 12V regulator (a 10A buck/boost regulator, 8-40V input, 12v output). Most of the lights are made for 12V. But in a car/van, the voltage can be anywhere between 10 and 15V, depending on the battery type and SOC (State of charge). Since 15V is about 25% over its 12V rating, I didn’t want to expose my led lights to this (preventing premature burnout).

Everything else is directly connected to the fuse box (Maxxfan, boiler, diesel heater, refrigerator, waterpump and so on)

Unlike a lot of vanbuilers, I didn’t include any USB sockets in my van. Instead, I used the regular 12V outlets (cigarette lighter sockets)
Why? Since this is more future proof. A few years ago you needed a 5V 2A to charge your phone. Now, depending on the phone, you need QuickCharge for example, while other phones starting to adopt USB-C. The demand for power continues, and the technology continues evolving.
Having fixed USB ports would limit the usage to the system installed… Having a 12V socket allows me to simply upgrade the charger to whatever is needed at that time / whatever device I own.

I also installed a small 6 litre boiler for heating water. Yes, this draws a lot of power, and is not really recommended, especially with the 105Ah lead-acid battery. It will drain it pretty fast, especially with lead acid, where only 50% of the capacity is actually usuable (unless you’re willing to kill the battery, or at least shorten its lifespan significally)
But with the amount of solar, I still can run it, and power it on when needed.
Once the new lithium battery is installed, it won’t be less of an issue. 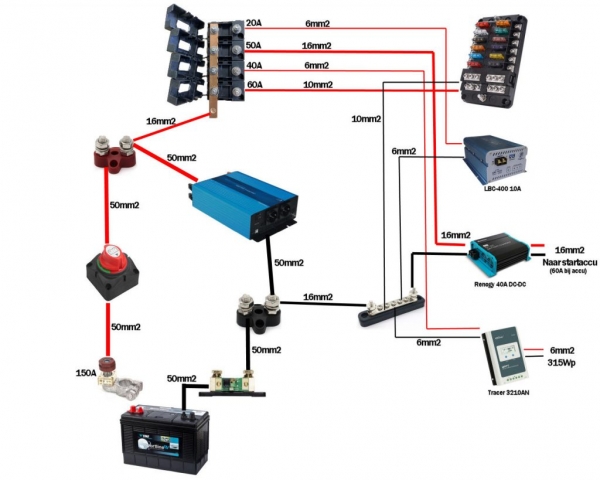 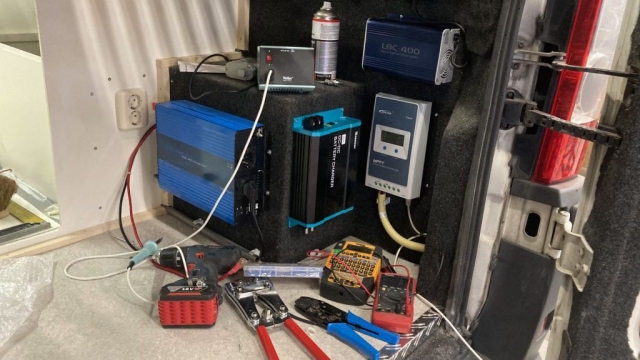 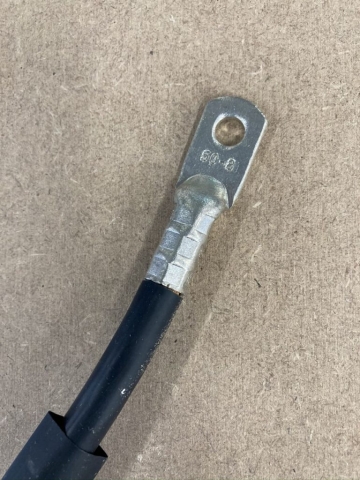 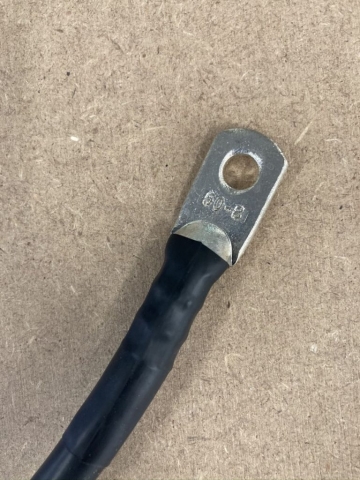 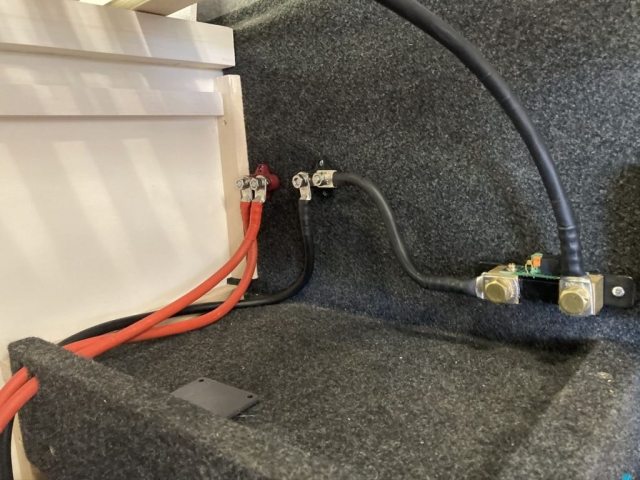 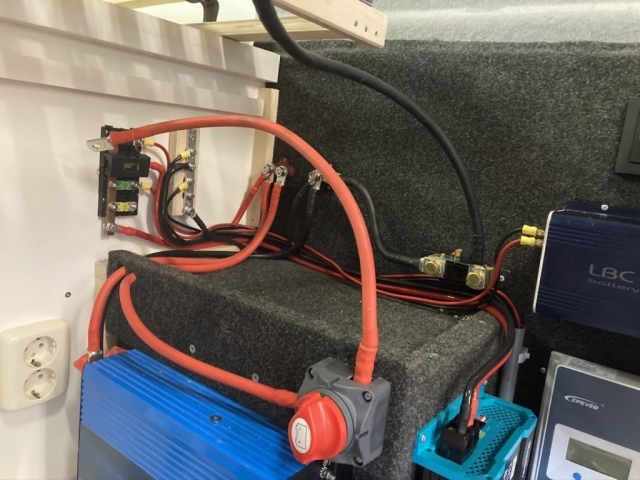 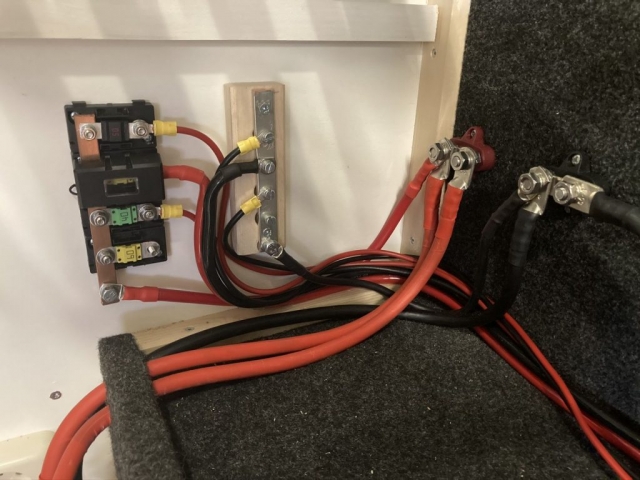 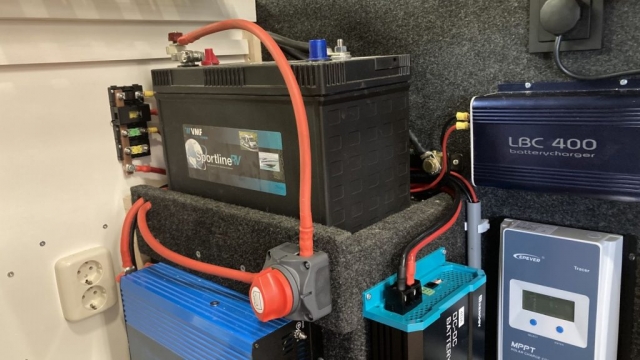 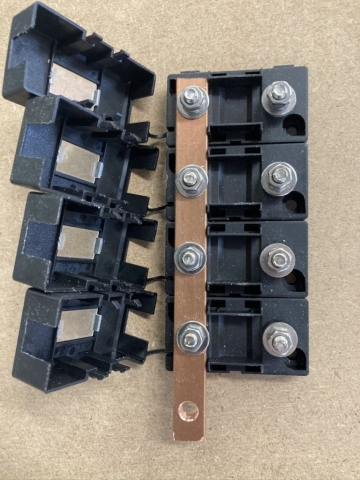 One Reply to “Electrics”